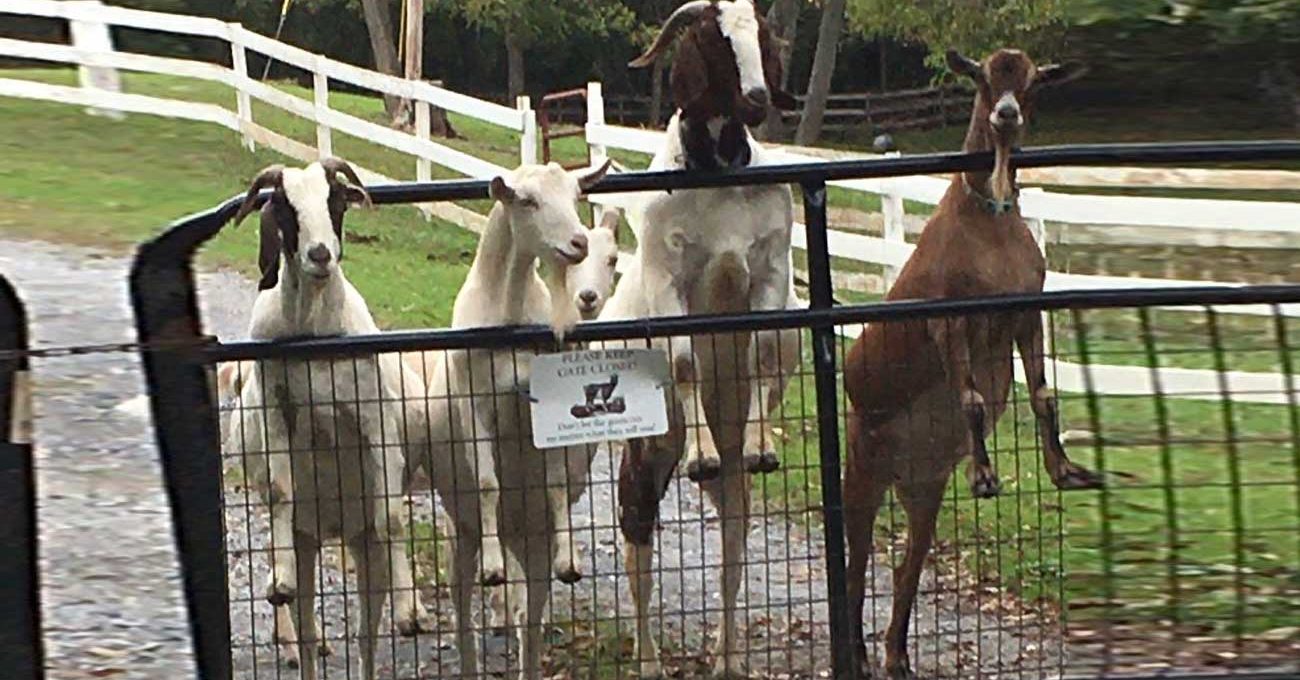 Long before I lived on my own farm, I visited other farms. Well, OK, I really only visited one, but that was what did it. City-raised, with a taste for fancy Italian restaurants and silk skirts, I didn’t expect to actually like being in the country, but my friend had lured me with New Year’s champagne in the barn. So I went. And that, as they say, was that.

Something that struck me most vividly on that visit was the way the blue-eyed wooly goats would stand in a huge group and just look at me. I’d never seen Angora goats before – they were eerie beings: such light eyes, set apart wide on their faces, fantastical horns, and long curly white locks flowing like those of a Renaissance beauty. And they all stood stock-still, just watching. It had never occurred to me, frankly, that goats would want to look at much of anything in particular, never mind at me. Silly and unschooled in the ways of farm animals, I looked back right at them and I suspect that that is when they put the goat spell on me.

Because, you see, those eyes followed me through the years. I started talking of goats even while living in a Washington, DC basement apartment. I talked through two subsequent suburban dwellings, in downtown Chinese restaurants, on the subway, to friends, landlords, and work colleagues. I talked and talked, and only a few kind souls listened with any interest. That is to say, I really got little encouragement on the goat front, but when a person is determined to do something, here is the confounded proof that there is no stopping her.

Nowadays when people come to visit the farm I ultimately bought with great glee and plans involving goats, they ask me, “um, why did you decide to do this?”, as they pick their way among piles of poop and look somewhat askance at a broken fence board. They are envious, really they are. At least some of them are, I’m sure of it. They want to know what amazing stroke of luck was bestowed upon me when I found this property with rolling hills and the big yellow barn, what genius inspired me to move from city to country, donning overalls in place of designer dresses.

One thing is sure: I never tell them about the goat spell. They might think I’m weird. So I just say how much I’ve always loved animals. This group of animals I currently care for is very simply an expansion of my previous life with dogs and cats. Sheep? Sure! A nutty llama named Jean-Claude? Mais oui! A bull? Bring it on. The fact that the non-stop four-legged partying at my farm primarily involves my cleaning up after everyone all the time doesn’t bother me. I know that I’m the hired help. That’s OK, it makes me feel useful. Early on in my hands-on ‘let’s become a farmer” training I did have doubts, though. Oh, I loved farm life – crisp, clean, air, seeing the stars at night, the intense peace of hearing animals crunch on hay, and the smell of the woodstove burning in winter. And I was free from the constraints of pantyhose, work cubicles, rush hour, and clean shoes. I didn’t need to ask permission if I could paint my front door bright red, or put up a new chicken coop or dye wool in the back yard.

But I was wracked with the insecurity of a city slicker. Was I cut out for this life? Then one morning I woke up to the sounds of scuffling, clacking on the wood floors, and great crashes of something large and messy. It turns out the goats had let themselves in by the back door and were engaging in one of their architectural projects. In my living room. Probably most normal people would have been a bit annoyed. But I laughed myself silly and knew at that moment that I was not only qualified to be a farmer, I had landed this job for good.
I know many of you are dog people. Many of you are cat people. And, I wager, you have no say in the insane level of devotion you have to these animals and the lengths to which you will go to make them happy. So I need to issue a warning: most of us don’t consider what will happen when we gaze into the eyes of other types of beasts, as I did those many years ago. Those of you ‘back to nature’ types might well want to think long and hard about this. Because I can’t guarantee you’ll be lucky enough to have a goat like Newman, who has such a following that people phone up asking to schedule a meeting with him. This animal is uncannily smart and always one step ahead of me. My neighbors are now used to the sounds of cursing and then an exasperated “Oh, NEWMAN, NO!” As with most smart goats, unlatching any farm gate is chump change to him, but Newman has also figured out how to open unlocked car doors. He’s eaten my mail, rolls of stamps, my checkbook, and the remains of fast food lunches. I’m not sure just what he’s eaten in visitors’ vehicles. He has destroyed fencing, the trellising on my back porch, eaten the fruits of my vegetable garden, terrorized little children, and routinely roughed up the other animals. He’s perfectly terrible, immensely handsome, and oh so loving. He’s the quintessential bad boy. And I adore him.

Now, I have one worry. This phenomenon, this goat hypnosis thing, with dozens of them bunching together and watching you as with one set of eyes: my flock does the same thing. It’s unnerving. I’ve bottle-raised some of these animals from one day old, cleaned their bottoms, dressed their wounds, dried their tears (OK, I’m lying about the tears part); others I’ve saved from the dinner plate, and then there is Little Boy the retired gangsta goat whom I took in off the street, no questions asked. Wouldn’t you think the looks I’d get might reflect gratitude, some dog-like adoration, even a little well-earned obsequiousness? I could be cynical and say they are just watching to see if I’ve got corn in my pockets — but I do believe there is more to it. Some days it just creeps me out and I make a mad dash to the front door of the house, slamming it just in time to have it bashed by a goat. I wonder – have I created a herd of monsters? Will I wake up one day to find myself trussed up in duct tape, all the gates swinging open, my money and truck long gone?

When I get over trying to do threat assessments, and engage in some real serious looking at what I’ve decided to do with my life, I see I am living with a family of creatures who have no pretensions, no inhibitions, no fears, who are so at peace with the world that they are free, in fact, to gaze unabashedly at humans. They may just love me for my pockets full of grain, but how often in this world do you encounter that much honesty?