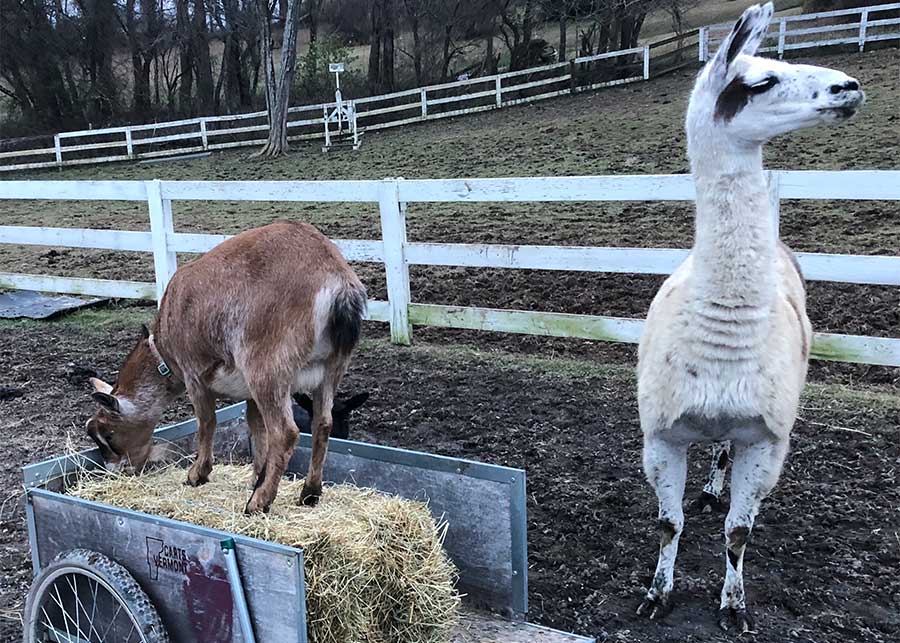 It’s not too hard to figure out that it’s easier to keep an apartment nice and tidy than it is a farmhouse.  I used to have an apartment.  Now I have a farmhouse.  We could end the story right here, because I’ve given away the punch line.  Or have I?

Now, I’ve seen some aberrant farm households that display clean, debris-free oriental rugs and polished floors, spotless bathrooms, and no veterinary detritus, no evidence of animal bodily functions, or, in fact, no trace at all of the outside (aside from cut flowers in a crystal vase).  Some of these households even have dogs inside, which confounds me.  Who are these clean dogs?  Who are these clean people?   How is that they have no grit, gunk, mud, muck, hay, straw, feed pellets, or, last but not least, someone’s poop inside their house?   I’ll bet these folks can wake up the morning and walk around barefoot without even putting on their glasses.

I think farm life is something that just happens to you. Like a car accident. Or marriage.

The other night as I fed the woodstove that heats my house, I contemplated the dog door.  Neatly cut into my storm door, it’s a late sleeper’s dream but it sure lets in the cold air.  It occurred to me that I live half outside most of the time, or perhaps more accurately, the outside intrudes into my house nearly all of the time.

How did this happen?   I don’t think I even like the outdoors that much (dating sites might ask, “are you outdoorsy?”  “Goodness no”, I would respond).  See, I do not like dirt.  I do not like sleeping on the ground or peeing in the bushes.  I’ve only camped twice in my life and it was because I was in a remote place of a foreign country where there were no hotels and I was out of transportation and options.  It was very uncomfortable.  I remember every detail of these ordeals including the outhouse in the middle of the Egyptian desert with a hole in the ground, no door, and a camel out back.

As farm life progresses, as farm life is wont to do, I’ve discovered quite a lot that, had I known better, I might still be an apartment dweller, happily drinking cappuccino, wearing clean shoes and going to films on the weekend.   Instead, I’ve found I have an ever evolving list of unpleasantnesses in this thing called “farm life”, way beyond mere dirt.

For instance – I do not like the unknown bumps (gravel? goat pellets?) that always seem to be getting between foot and boot.  I do not like the persistent tiny pieces of grit in my bed that cause me to toss and turn and flap at the sheets endlessly like an inelegant Princess and the Pea.  I do not like the seasonal insects who take up uninvited residence in my house – at least one species for each season (I guess they don’t want me to feel lonely).  I do not like those bits of itchy straw that make their way down my shirt and are awful and embarrassing (“excuse me while I sweep out my bra”), and more than once I’ve had to stick a finger dipped in perfume up my nose so as to avoid a gag-inducing smell.  Really, it is all most decidedly disagreeable.

You armchair nature lovers, I’m here to tell you that the outdoors is simply not so nice.

I’m not going to give the prosaic version of, “well, you know, I had this vision…”  No.  People with visions still have clean apartments and get to go to the movies on the weekend.  I think farm life is something that just happens to you.  Like a car accident.  Or marriage.

So those sweet days of making curtains and polishing knick-knacks, purchasing lovely rugs that you are quite sure no one will ever pee on,  actually having a choice of nice clothing to put on instead of “which jeans look the least dirty” – those days are gone and, honestly, the notion of keeping house seems a funny concept.  If the dishes are done and the bathroom will not be condemned by the health department, and, at the end of the day I am rewarded with some sitting down time, preferably in front of the fire, preferably with a book and some cocoa, then life is good.

But it doesn’t always work out that way.  The other night I was called out of my cocoa-sipping stupor into the cold and windy night to examine a wound on Nicole our Great Pyrenees dog.  I grabbed the mini clippers, iodine, nolvasan, hydrogen peroxide, gauze, flushing tube, Baytril, Rimadyl, and I shaved and flushed and cleaned.  In the dark, by the light of a headlamp, wind whipping around.  Worrisome.  Uncomfortable.  A bit nasty.  Done treating, I headed back inside and Nicole scampered off, happy for the cookie reward and for being left alone to do her job (or to find a cozy spot to nap, more likely!).  Suddenly I felt warmed by something other than the woodstove.  It struck me that I was not remotely put out by this interlude, and, in fact, I was glad to be able to do it.  Glad I was here.  Glad I had the tools. After all, I had just ‘tended to my flock’.  And, by God, no one had died (we set the bar somewhat low on farms). By the bye, Nicole is fine now.

I left all the veterinary detritus on the kitchen table, that sturdy piece of furniture serving as grand central station in any farmhouse.  I might need it again soon.   I was dirty and cold, my hands covered in things we won’t discuss, and I felt … great.

So that’s how I got here. That’s why I stay.  Good housekeeping be damned.